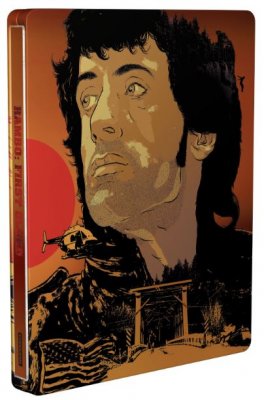 When small town Washington sheriff Will Teasle (Brian Dennehy) detains a vagrant drifter for resisting arrest, little does he realise that he has set in motion a series of events that bring mayhem and bloody reckoning to his community. The shabby vagrant is in fact former Green Beret John Rambo (Sylvester Stallone ? Rocky, Creed, The Expendables), a hero of the Vietnam War who has returned home to find America no longer wants him. Responding to brutal treatment from Teasle?s Deputies with sudden ferociousness, Rambo makes a daring escape from the town jail, steals a motorcycle and roars off towards the wilderness with the sheriffs not far behind?

Fully restored for the first time ever, First Blood is the explosive action-thriller that started it all! A breathtaking portrayal of America at odds with itself. Featuring both the UHD and Blu-ray copies of the film with a host of bonus materials and presented with brand new exclusive artwork from artist Jan Feindt, this is a must-have for any action fan.